Penny is modelling my latest make, using Stylecraft Carnival in New Orleans. The pattern is basically the Agnes scarf from the Fiberflux blog, except I did it differently. Because I was using a different weight yarn, using a 6mm hook, I chained 27 to begin with, but I’m fairly sure 26 would have been fine, and then I followed the pattern, which is a repeat of two trebles, two chains, two trebles, each row worked into the top of the last. Because I made it wider, I did use two balls, but probably only used about 20-25g of the second ball. And I ended up with eight repeats across, so I used 8 small wooden buttons to finish.  It’s an awesome cowl. If you did 6 repeats, I expect you could get away with just the one ball. I need to think of something fab to do with what’s left.

In shop news, I have some more medical procedures to endure, so my workshop schedule is a bit broken. My surgery is arranged for coffee morning day, so I will reorganise everything next week. Groups will stay the same, unless they don’t, in which case I will mention it. Phil has opened his awesome outdoors store in the Courtyard, so come along and see us both. There’s free parking.

And special announcements soon, so keep an eye on the shop, on the Facebook and on the blog. 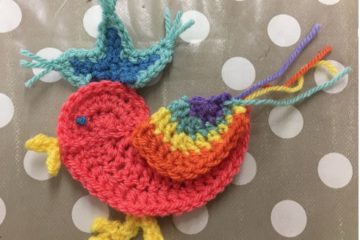 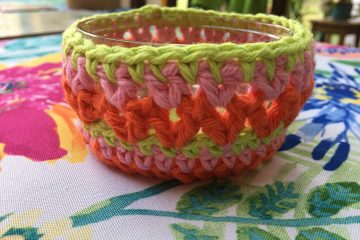 We’ve been enjoying working with cotton yarn recently; must be the weather! Lexie and I had some fancy chocolate puddings from one of those German stores, and when we had finished them, I noticed that Read more…

So, the cowl is complete. I whip stitched it from the inside, and worked the ends in. Afterwards, I had that shortish length left, and did wonder if it might stretch to a flower. I Read more…

We are open! Monday - Saturday 10am - 2pm Thanks – Kate @ Crochet Cottage Dismiss